Malindi MP Aisha Jumwa on Tuesday reiterated that the Deputy President William Ruto’s journey to the Presidency is unstoppable.

Speaking during the burial ceremony of Mathira MP Rigathi Gachagua’s mother, the MP assured the DP that they will remain unbowed in their quest to ensure the he clinches the top seat.

“As at now, we are competing among ourselves for the top seat. Let them be first in organizing themselves for the race. Dont you those who won’t compete with us? Come 2022 very early in the morning, God willing William Samoei Ruto,” said Jumwa.

The ODM MP-turned-rebel further dismissed those calling on them to stop early campaigns saying they will keep pushing for Ruto’s candidature.

“If the second coming of Jesus is what we dont know when it will happen and we are being prepared every day how can we fail to prepare for 2022 that is so near?” posed Jumwa.

The 2022 Journey to State House is unstoppable! @WilliamsRuto. 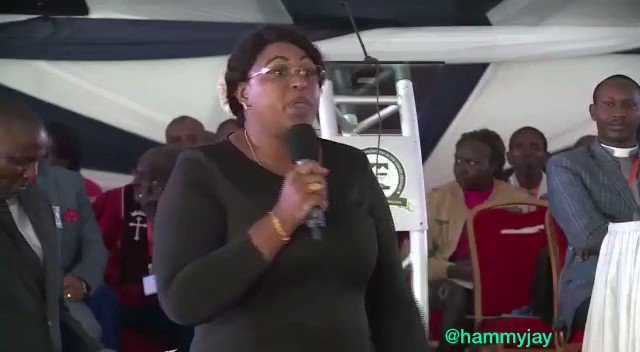 181 people are talking about this

The MPs present also pledged to support DP Ruto and urged President  Uhuru Kenyatta to retire upon the expiry of his term.

Gatundu South MP Moses Kuria declared that President Uhuru will go home come 2022 adding that those pushing him for the Prime Minister’s position are misguided.

Cabinet Secretary for Agriculture Mwangi Kiunjuri, also present, urged the Mt Kenya region to honour the covenant they sealed with the DP by supporting him for the presidency.

The DP in his address also expressed optimism that President Uhuru will not extend his term come 2022 adding that he was certain will retire.

The remarks by the MPs come a few days after former Jubilee Vice Chairman David Murathe claimed that the President will go nowhere come 2022.

Murathe said that the President Uhuru was only barred for contesting for the presidency but he was free to become the Prime Minister if he deems necessary.

The remarks opened a heated political debate with President Uhuru finding himself at the receiving of massive criticism from leaders allied to DP Ruto.

Kandara MP Alice Wahome labelled the President a threat to democracy and freedom of expression saying Murathe’s remarks cant be taken for granted.

However, the President has on record insisted that he will retire come 2022 and has no interest serving for more years.

Funny Video of Young Girl Telling Her Mother She is Tired...

Breaking news: Governor Sonko to be rearrested for slapping an EACC...

Breaking: Governor Sonko to be remanded till Wednesday at industrial area...