Some parents in Kitui have come out to rubbish claims that a teacher at Ndooni primary school was burnt to death over poor results.

In a detailed statement, the parents have accused the late teacher of having an insatiable appetite for Ben 10s hence infecting them with very weird diseases.

This, they say has affected effective learning in the school as most children have been initiated into the sex cult.

“We will not remain silent as we watch the rogue media continue airing false news. We are on the ground and if you ask everyone in this region you will learn that Daisy was obsessed with young boys. She has infected many boys in the region with weird diseases and whenever we reported the matter to authorities she always had a way of pocketing them” a statement from Eva Katunge read.

Reports from field officers in Mutitu indicated that a group of parents stormed the school on Monday morning on the 6th of January 2020 and closed for undisclosed reasons, after which it was later reported that Madam Mbathe Mbaluka had been burnt to death.

Two have already been taken to court over the murder; Wambua Mwangangi and Chris Kyalo.

TWO IN court for burning to death Daisy Mbathe, a teacher at Ndooni Primary School in Kitui, over wanting performance by KCPE candidates last year. 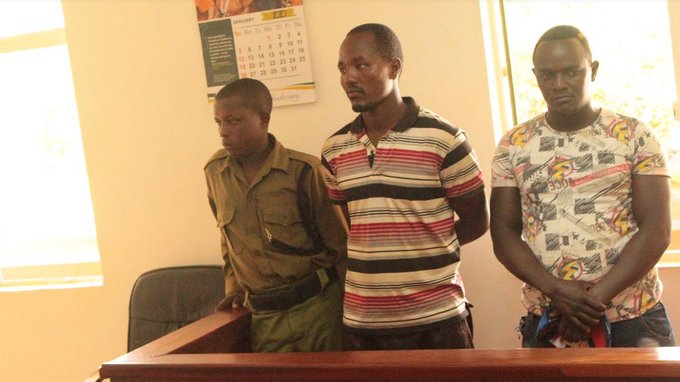 128 people are talking about this

Kitui Resident Magistrate Felistus Nekesa granted an application by Mutito criminal detectives to detain the suspects at Mutitu Police Station for 21 days pending conclusion of investigations into the murder.

Kitui KNUT Branch Executive Secretary Simon Nding’o condemned the incident which he termed as a serious threat to the entire Kitui teaching fraternity.

TSC has also vowed that it will not hesitate to take necessary measures such as petitioning for closure of institutions where the security of teachers is at risk.

Atwoli in a pregnancy scandal with granddaughter in-law

Esther Passaris sex tape with a Congolese delegate at the Bomas...

Raburu: My Wife Was Impregnated By Another Man Before Our Wedding,...

Governor Joho, Billionaire Buzeki among the beneficiaries of 900 acre controversially...

How Dr Robert Ouko begged Moi for his dear life