The ODM party on Friday came out strongly to dissociate itself with Embakasi East MP Babu Owino gun shooting incidence involving a DJ of a high-end club in Nairobi.

Through its party’s Seretary-General Edwin Sifuna, the party said it should not in any way be associated with the incident.

The Raila Odinga led party said that like any other public institution it is subordinate to the law of the land.

The party instead sympathized with the victim of the incident wishing him a quick recovery.

SG @edwinsifuna says the party sympathizes with the victim of the unfortunate gun incident involving Hon. @HEBabuOwino. Says the party should not be in anyway associated with the incident. The SG adds that, like any other public institution, the ODM is subordinate to the Law. 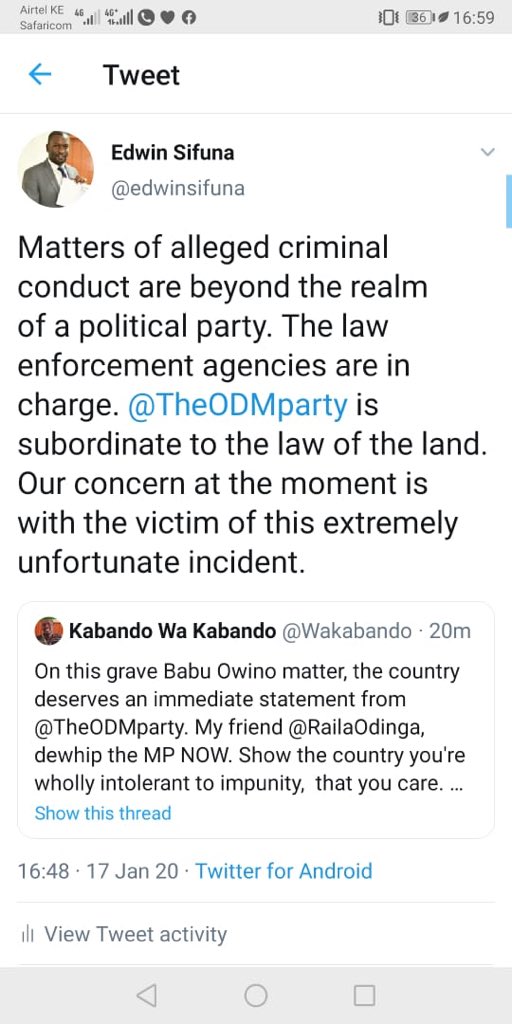 52 people are talking about this

Babu whose elective position into parliament was vied through the ODM party, was arrested at the hospital where he was waiting for the DJ to be attended to and is been held at Kilimani police station.

The party’s decision to dissociate itself with the legislator could be the unfolding turn of events which have seen the MP been involved in a lot of controversies recently.

His social media posts, some of which are inappropriate, have also elicited mixed reactions among netizens with a majority faulting him for his rants.

On Thursday evening, the MP posted on his social media pages over the impending Raila presidency, eliciting negative reactions from a majority of his followers.

In early 2018, Babu was arrested by flying squad officers outside Parliament buildings for allegedly assaulting a parking attendant in Westlands.

Breaking news: Governor Sonko to be rearrested for slapping an EACC...

Man dies during sex competition after finishing the seventh round

“Babu Owino’s case is acquaint hallelujah as it will be sent-to-coventry”...