Cherenganyi Member of Parliament Jushua Kutuny on Saturday, January 25, launched a scathing attack at leaders allied to Deputy President William Ruto over their stand on BBI.

Speaking at the Building Bridges Initiative (BBI) rally at the Mama Ngina grounds in Mombasa, Kutuny tore into Elgeyo Marakwet Senator and the Senate Majority Kipchumba Murkomen and his fellow Tanga Tanga politicians accusing them of hypocrisy and dishonesty in their support for the BBI process.

Kutuny went ahead and demanded an apology from Ruto’s allies for disrespecting and insulting ODM leader Raila Odinga.

He said that for Kenyans to move on, tanga tanga politicians must apologize to the former premium for branding him a ‘witch’. 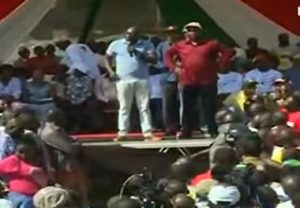 The legislator furthered said that age is just a number insinuating that Raila still has enough energy left to marshal a serious campaign to counter DP Ruto come 2022.

Kutuny added that the famous handshake between Raila and President Uhuru has brought the country together urging those who oppose the Initiative to bury the hatchet and join the two leaders to unite the country.

Murkomen who spoke ahead of Kutuny in a sudden change of tune declared his support for the referendum calls saying that time is ripe for a referendum that would create Prime Minister and Deputy PM posts.

“The people of Kenya do not oppose all the recommendations, whether be it PM or deputy PM, then we shall give them a referendum,” Murkomen said.

Odinga also outwardly denied claims of ever reaching to Deputy President  William Ruto as earlier claimed by the latter in a recent interview.

He ridiculed the DP saying that he could not approach a person who was not a presidential candidate to address national issues.

“You heard someone say that I looked for him before reaching to Kenyatta. That’s not true but it is also in the past. Right now we want to address critical issues like the Likoini Ferry Channel which has killed many,” Odinga affirmed.

Odinga also wowed the crowd when entertained them by singing a well-practiced Swahili song to them. Joho also showcased dancing skills later as Odinga exited the stage.

KCSE 2019: Top 10 schools with highest number of straight As

Release Youths From the Burden of Higher Education Loans Board by...

Am being sexually harassed in police cells, an emotional Babu narrates