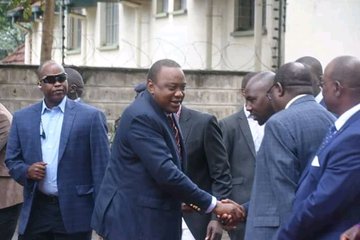 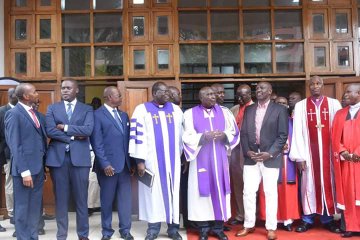 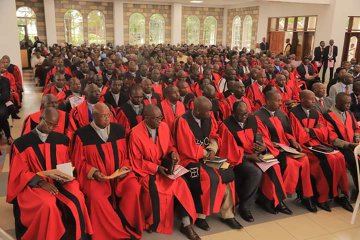 181 people are talking about this

The two leaders have been sharing a foul relationship for some time now.

Just recently, President Kenyatta reorganised his Cabinet and the effects of the Building Bridges Initiative (BBI) were prominently visible in the changes to government.

Since last year, particularly soon after the launch of the BBI report, the relationship between the President and his deputy has been anything but cordial.

Last year, there is a time when the head of state avoided his deputy at Jomo Kenyatta International Airport (JKIA).

Just recently, Ruto was locked out of his Mombasa official residence with “orders from above”.

We have also seen the president supporting BBI with his deputy opposing and terming BBI rallies s waste of resources, until recently when he, alongside his allies decided to dance to the BBI tune.

As they meet today at the church service, a section of Kenyans are anxious, ith some speculating that it is change of BBI tune by Tanga tanga members that has made president Kenyatta to attend the event alongside his deputy.

Say are praying that the two should bury their differences during the service.

Some are arguing that he two leaders are just acting and pretending on their fallout. But do you think this is the case?

Here are some of the reactions.

VIPINDREE Uhuruto are Just acting & Pretending. Kenyans know it’s not well between them. Constitution is forcing them to be together. Were it not that DP would have been SACKED long time. Marriage between Uhuruto is an emotionally & psychologically abusive marriage. It’s over!

The church continues to fail at playing their role, they bootlick government instead of REBUKING, in the bible nowhere Jesus cajoled politicians cz he knew they’re oppresors, when you see ur church sleeping with gok know that the nation is doomed

“Senior wardens baying for my asshole with orders from above” Mike...

Kenyan men sign a petition compelling Sam Shollei to be a...

Drunk Gideon Moi demands father to be burried near Kenyatta