In the late hours of Wednesday night, the Senate Assembly finally sealed the fate of one Ferdinand Waititu as governor of Kiambu County, opting to oust the embattled politician.

Waititu had, during his two-day senate appearance, put up a weak but spirited defense, at one point, resorting to threatening Senate with retaliatory action, if he was impeached.

But Waititu’s case was hopeless, and even his political friends under the Deputy President William Ruto-allied Team Tangatanga knew this.

Taking to Twitter just a few hours after Babayao’s ouster, Elgeyo Marakwet Senator Kipchumba Murkomen did not indicate any form objection to his counterparts’decision, instead, only laughing at the speed at which the government gazetted Waititu’s impeachment.

The legislator, who has positioned himself as Tangatanga’s key spokesman, shared a copy of the gazette notice dated 29th January 2020 at midnight, just three hours after Senate took the final vote on the former governor’s fate.

”The efficiency of the Government Printer should be emulated by all,” Murkomen said with a hint of sarcasm and bitterness.

According to the document, Waititu was removed from office due to gross violation of the Constitution, crimes under national law, abuse of office and gross misconduct.

The efficiency of the Government Printer should be emulated by all 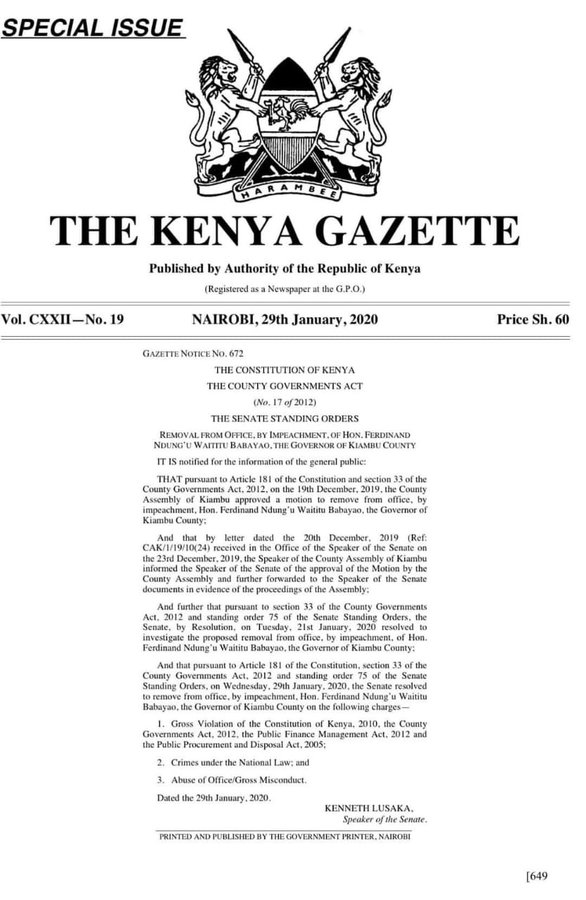 1,102 people are talking about this

Apart from Murkomen, other senators who had been on Waititu’s side during his hearing were Nakuru’s Susan Kihika, Lamu’s Anwar Loitiptip, Meru’s Mithika Linturi, Kericho’s Aaron Cheruiyot, Nandi’s Samson Cherargei, and nominated senator Millicent Omanga.

In a Twitter post following Waititu’s impeachment, Cherargei lamented that the decision was unjust toward the Kiambu electorate, adding that devolution was under heavy attack. 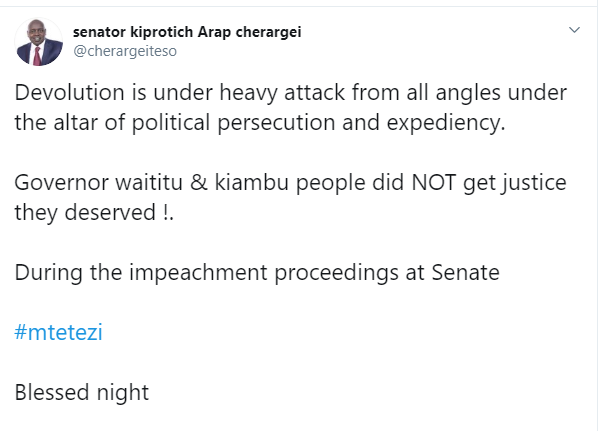 All eyes are now on the Judiciary, which is Waititu’s only lifeline.

DJ Evolve thanks Jehovah Wanyonyi for saving his life

Starbucks secret menu the drinks you didn’t know you can ask...