Reverend Victor Githu, a young preacher who is interested in ministering the word of God in Kenya has now through the will of God administered a curse to girls who lose their virginity before marriage.

He has viciously stated that such girls will never know peace for disrespecting their true ribs by fornicating with busybodies. “It is the will of God for a woman to preserve her virginity for her husband. Any woman who cannot adhere to what has been written brings curses to the generation of an innocent man, and the soul of such a woman belongs to the devil” he stated.

According to the 10-year-old ‘Nabi’, women who sleep with countless men before they meet their perfect match will be thrown at the hottest end in hell.

He has urged young girls in the country who are yet to sell their souls to the devil through the sexual sin to emulate Reverend Lucy Natasha, a celebrity preacher who has been able to protect her dignity for ages.

“It is absurd that at 18 we no longer have virgins. Where are we heading as a country if not at the bottom of hell? There is nothing good in having sex with a man who will not be your husband. It is a disgrace and I will not shy from telling the crumbling generation what the most high has ordained me to do” Reverend Githu quipped.

The youngest preacher who has been a subject of ridicule by women in the country has earned himself thousands of male followers in the recent past because of his teachings on submissiveness and forgiveness.

Reverend Githu’s latest remarks on single mothers ignited a public debate online. Women in the country criticized the 10-year-old for disrespecting single mothers and urged the media to stop giving him publicity.

The Reverend once confessed to having attempted to take his life at the age of five, when his mother tried to curtail his blossoming career.

“I told myself, ‘you lady if you do not want me to preach, it is better I commit suicide’. But as I was trying to tie the rope, I remembered I needed to say goodbye to my brother. My brother could not let me die and he immediately ran to inform my mum,” he once narrated.

His mother who was also present during the live gospel show explained what finally brought her around to supporting her son’s passion for preaching.

“He told me that he can preach but I just didn’t believe him. I didn’t even know that he knew English,” she recounted

“So I took him to the market and then went and hid at one of the stalls just to see what he would do. To my surprise, he went ahead and gave a powerful sermon on obeying God with all that you have. I realised there and then that this was his calling,” she further disclosed.

On his part, Githu opened up on the various challenges he constantly faces due to his relatively young age.

“People used to say that I’m crazy when I started preaching, but I tell them one thing, you’d better have craziness that can take you far than the wisdom that will take you nowhere,” he said.

Quizzed on whether he misses being a child and getting involved in games with his agemates, he simply said ‘no’ and added that he prefered engaging in activities such as biking and swimming.

He has been a huge hit on various social media platforms, with his very first video going viral on twitter. Currently, videos of his lively sermons, prayers and interviews garner an average of 100,000 views on YouTube, a remarkable fete for someone so young.

Githu is already being mentioned as one of the evangelists to watch, with his profile on a trajectory that has seen him mentioned among household televangelists such as Pastor Maina Ng’ang’a of Neno evangelism.

His mother gave a candid confession on the struggle she faces due to her son’s ever-growing profile.

“There have been many challenges especially from neighbours and friends who always go around saying I’m just making money out of my son’s prominence,” she revealed.

She went on to make it clear that it was actually Evangelist Lucy Wa Ngunjiri -Founder of Prayers Beyond Boundaries Ministries, and Gospel presenter in Itaha Ria Muoyo on Kameme FM, who had volunteered to cater for her son’s every need including the clothes he wears.

“I thank God for the favour,” she reiterated.

Here’s a short clip of the young preacher in his element at NTV studios: 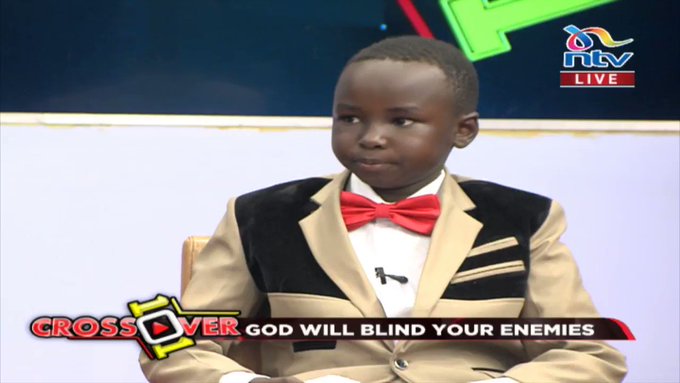 Breaking news:Oscar Sudi says uhuru is behind the covid-19 spread to...

“Uhuru has kicked me out of Jubilee over my swag”Aden Duale...

”I am pregnant for either Ruto or Farouk Kibet” University girl...