Kitui governor Charity Ngilu on Sunday came under heavy fire from supporters of deputy president William Ruto, after she published a statement demanding for the resignation of the deputy head of state, to allow investigations into the brewing gun-tender scandal involving his close ally, Rashid Echesa.

In her statement, Ngilu expressed her shock at the fact that such a scheme was crafted in the DP’s office, an institution charged with ensuring the security of Kenyans.

Citing a Sunday morning tweet by Ruto over the issue, Ngilu asserted that the DP had admitted to having taken part in a controversial meeting, linked to the gun fraud case, adding that this was not the first time Ruto was mentioned under such circumstances.

The Deputy President should stop hoodwinking Kenyans through tweets and do the honorable thing, STEP ASIDE and let investigations be conducted in an impartial environment. #AnnexCrimeScene 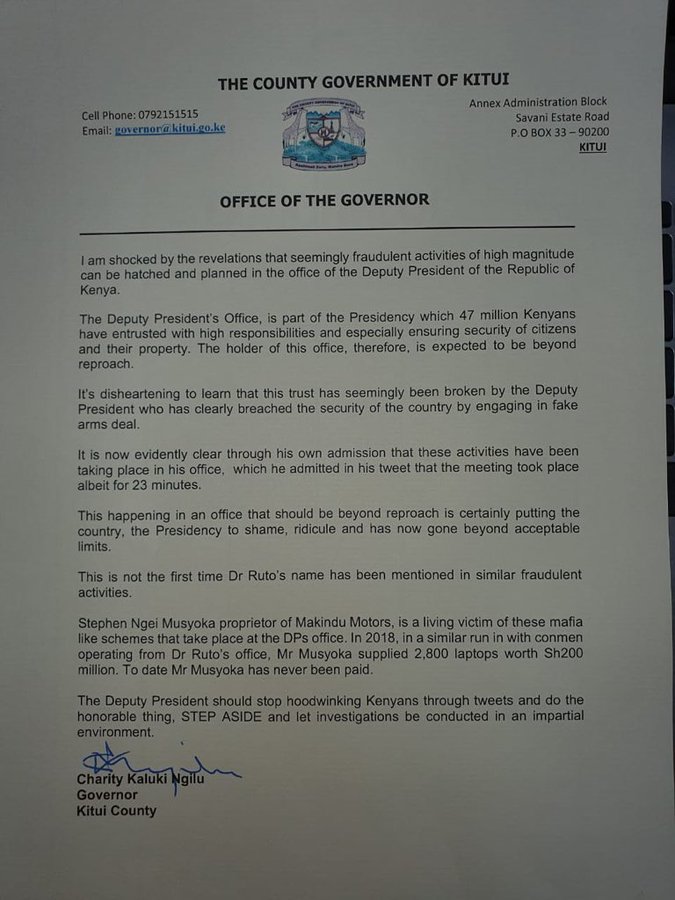 1,035 people are talking about this

The DP’s allies under the Tangatanga faction, however, promptly jumped to the defense of their leader, questioning Ngilu’s moral authority on the issue, since she was in the past linked to fraudulent dealings at Kitui County and during her tenure as a cabinet minister.

According to Elgeyo Marakwet senator Kipchumba Murkomen, Ngilu was on a payroll, with her main duties being to drag Ruto’s name through whichever mud she could think of, to take the spotlight away from her own crimes.

”The tragedy is that Ngilu has been advised that as long as she attacks DP Ruto then her file which is ready for prosecution will be shelved and she will remain free,” he stated.

The legislator added that Ngilu was under the BBI siege and she was safe as long as she ”attacks DP&sings BBI’.”

On his part, Kikuyu MP Kimani Ichung’wa termed Ngilu’s attack on Ruto as an act of desperation and hypocrisy since she was no saint herself.

”DESPERATION mama will kill you! How many times have finance offices being burnt in Kitui?? Deal na hayo (deal with that) and let @DCI_Kenya do their work. This is not that dance the late Michuki told you!” he retorted.

400 kids who were named after Moi’s death in Kabarak to...

How to drive growth through customer support

I was Ruto’s girlfriend in primary school-Woman says she has no...