Nairobi, Kenya-Kenya’s Deputy President William Ruto has escaped an assassination attempt by a whisker after 3 bullets were fired into his car. This happened at exactly 12:10 pm after a heavily armed man dared Ruto’s security detail.Confidential reports confirm that Ruto is in good health as he was not injured.

“He is very stable, medics are doing checkups on him,” a police officer told our reporters. Detectives are pursuing the hitman who managed to vanish into thin air after the assassination attempt on the Deputy President. The reason for the assassination attempt on William Ruto is not immediately known but unconfirmed sources say that the attack was well calculated by some members of the political class.

A 17-year-old boy has been detained by authorities pending an investigation into the matter.

Deputy President William Ruto on Thursday, April 8 addressed Kenyans on the Covid-19 pandemic from his residence in Karen, Nairobi.

Ruto. who has been missing from the public eye in recent weeks, urged Kenyans to strictly adhere to measures announced by the government in a bid to combat the spread of the virus.

“This crisis has completely disrupted our lives and taken away everything we took for granted. Normal is a word that we have to unlearn,” he stated.

He acknowledged that Covid-19 had seriously impacted the lives of regular Kenyans, offering the examples of boda boda riders, mama mbogas, barbers and salons who were suddenly required to comply with a raft of new regulations.

He reiterated that the country did not need bombs or other weapons to combat the virus but, rather, all Kenyans to practice precautionary measures.

“We are in a new place, confronting a situation that is wholly unprecedented in our time. Simple behavioural and hygiene measures such as avoiding handshakes, wearing masks, social distancing and staying at home, simple as they seem, guarantee us a deadly blow to the virus.

“Those not committed to the measures should know that they are putting their lives, those of their families and millions of Kenyans at risk. We cannot negotiate our safety and survival. Let us be our brother’s keeper,” Ruto asserted.

Ruto advised Kenyans to minimize their movement to curb the spread of the virus, particularly calling for the partial lock-down in four counties to be taken seriously.

He also urged factories to come up with new shift systems that ensure compliance with directives on the curfew and protect workers’ safety.

In addition, he urged employers hit by the economic downturn from the pandemic to avoid laying off workers and endeavour to protect livelihoods by exploring other cost-cutting measures in non-essential areas.

He also made a special appeal to the banking sector, calling on them to implement measures such as loan moratoriums to ease the burden on Kenyans.

Ruto asserted that President Uhuru Kenyatta had personally taken charge of the country’s response to the pandemic and was working together with devolved units and development partners to keep Kenyans safe.

He stated that they had prioritized reaching citizens with the information they needed to effectively combat the virus.

Among other things, he confirmed that the government had designated and equipped different facilities including the 600-bed Kenyatta University Teaching and Referral Hospital to deal with the crisis.

Ruto further stated that 94 hospitals had been identified to receive an increased supply of oxygen.

He also stated that they were working with counties to identify boarding schools that can be used as isolation centres if the numbers continue to rise.

In addition, he stated that he had received confirmation that the Kenya Medical Research Institute (KEMRI) was ramping up its testing capacity and would be able to undertake mass testing within the next two weeks.

Ruto also praised health-workers and thanked them for their work at the front-lines of battling the virus. He urged Kenyans to keep the medical professionals in their prayers and support them in any way they could.

In addition, Ruto confirmed that the government was teaming up with partners on provision of sanitizers, masks and ventilators to improve the country’s overall preparedness.

The deputy president also appreciated the role of the media in ensuring citizens were informed on Covid-19 and what measures to take to protect themselves and their families.

He further encouraged legislators in Parliament to explore ways to mitigate the effects of the pandemic even as the executive plays its part.

As he wrapped up his speech, Ruto acknowledged the upcoming Easter Sunday as he called for Kenyans to trust in God, assuring them that they would get through the crisis. 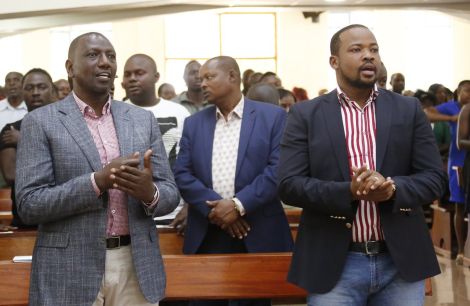 Be led by patriotism:Youth President Karen Nyamu message to Kenyans as...

Interesting Habits That will Help You Quit Smoking

Moi’s will shocks Kenyans as favorite dog gets 8 acres of...

How Internet Providers Get Around War Zones